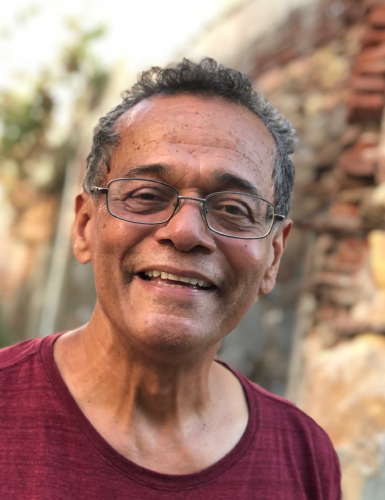 Diógenes Ballester is a visual artist, writer and educator from Puerto Rico and has lived in East Harlem, New York City for the past 40 years. He holds an MFA from the University of Wisconsin-Madison and a BFA from the Catholic University of Puerto Rico. His work has been exhibited in places such as Puerto Rico, the Caribbean, the U.S., France, and China. The Ponce Museum of Art holds an extensive permanent collection of his works. Ballester has received numerous honors including the Best Exhibition of the Year in Contemporary Media Prize by the International Association of Critics of Art (AICA), 2007. Ballester also has been published in essay collections, art catalogues, notably his writings have been featured in the catalogs of the first Trienal Poli/Gráfica de San Juan: America Latina y El Caribe (2004), The Chronology of the 20th Anniversary Exhibition of Taller Boricua at the Barrio Museum (1990), and in the conference proceedings he wrote Graphic Language in the Development of Individual and Collective Latino Identity, for the Latino Graphic Congress, University of Austin, Texas, (2009).

Ballester has also taught in many U.S. based universities and delivered many invited lectures in institutions such as the The Graduate Center (CUNY), University of Wisconsin-Madison, the Cooper Union, SUNY Albany, El Barrio Museum, and the Smithsonian.